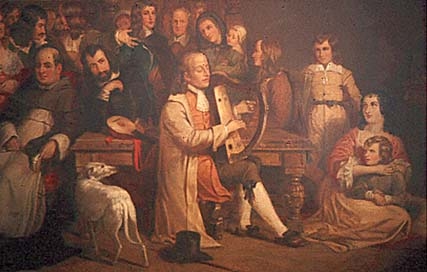 The harp is hugely significant in the story of Ireland. Indeed today it is our national emblem, and Ireland is the only country in the world that has the distinction of using a musical instrument as its national emblem. People associate us with the shamrock and the man himself St. Patrick, but the harp holds the distinction as symbolising Ireland. The other connection that people readily make with the harp is Guinness. However, enthusiasts of the pint of plain will quickly point to the fact that Guinness predates the Irish State’s use of the harp and is different in that the Guinness Harp is facing the other way around.

A name most synonymous with the instrument is the great Turlough O’ Carolan. In Irish traditional musical circles, O’Carolan is regarded as the father of Irish Traditional music. Some of the leading Irish Trad bands of today such as The Chieftains and Planxty would have taken their influence from the great man. In order to learn and master the instrument, O’Carolan had to contend with the fact that from the age of 12 he had contracted smallpox and was blind. He was born in a place called Nobber in County Meath in 1670. Despite his affliction, he would become a master composer and travelled throughout the land playing to the ladies and gentlemen that comprised the landed gentry in the comfort of their estates and manor houses of the period. And indeed it was considered a great honour to have someone of his stature playing in your residence. His music was, of course, traditional but with the extra dimension of the baroque school.

O’Carolan had had the good fortune of coming under the protection of a wealthy lady by the name of Mary McDermot Roe who took a shine to the boy, supplied him with a harp and paid for his musical tuition under the direction of a Denis O’Connor. At the age of 21 he set off on his travels, harp slung over his back on the road to a modest survival. He composed over two hundred pieces of music, and the songs that he contrived would have been predominantly in the Irish language as he had only Basic English.

Playing the harp itself had nearly died out towards the close of the 18th century but thanks to people like Edward Bunting, a musician and musicologist from Belfast who went around the country collecting and collating the music it survived. It was also felt at the time that people like O’Carolan might be the cause of civil unrest as they were regarded as the political commentators of the day. It appears, however, that O’Carolan’s focus was his music and he was the quintessential travelling bard who sang for his supper and engaged with people irrespective of the political climate of the time.

People like Seán O’Riada revived his music again in the 1960s when again Irish traditional music had been confined to the backwaters of oblivion. The Renaissance would continue into the 70s and 80s, but it always must come back to arguably its greatest exponent. He died in 1738 and was nursed at the end by his great friend Mary McDermot Roe herself in her 90s. His last composition was entitled Slán leis an ceoil-Farewell to music, before his last encore. The harp itself can be traced back to Biblical times. O’Carolan will always be traced back to wherever Irish music is played and enjoyed. The harp is his monument.