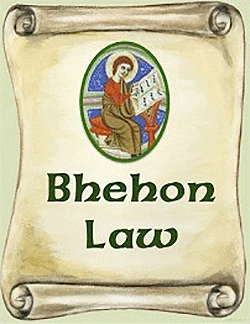 Ireland is predominately English speaking today. People visiting Ireland for the first time sometimes remark on this. However, the Irish language is alive and well with Irish speaking areas in different parts of the country. We call these Gaeltachtai where Irish is the first spoken language. Another interesting aspect of Irish life going back in time was the fact that we had our own legal system if you would. Prior to the advent of Common Law into Ireland we had a legal system that was totally different to that which exists today according to historical sources. Most significant was the fact that there was nothing akin to capital punishment in the Irish system.

By all accounts one way to settle grievances was by a system of levying fines. Thus the more serious the incident the heavier the fine. The Brehons were the people who adjudicated on such matters. They were wandering lawyers. The word Brehon comes from the Irish word ‘Breitheamh’ or judge in English. These laws were over two thousand years old apparently and are significant in that they established the rights of women as equal to those of men. They were finally eradicated in the 17th century and common law was imposed throughout Ireland. Leaving aside the external influences affecting Ireland at that time in history, a lack of  centrality put forward by some sources by way of explaining the partial demise of the Brehon Laws does not perhaps recognize the egalitarian nature of the law. Some sources for example put forward the question of land ownership as being of common value under Brehon Law.This suggests a commonality with for example the Native American concept of the ideal of acting as  custodians for the land. In terms of  paying a fine or in the Brehon system an 'eric fine' by way of restitution, this methodology may have similarities in other countries .

While some scholarly work has and is being pursued in the interests of gleaning more insight into the Brehon Laws in the world of academia in particular, we in Tailteann Tours are forever engrossed in this area of study and would welcome input from like-minded people. To that end if you wanted to submit a piece to us by way of generating interest in this particular area we would be delighted to hear from you. A paragraph or two would be more than sufficient. Our contact details are contained on our web site and please mark your contribution Breitheamh. It would be our hope to generate an interesting avenue of historical discourse on this topic over time.