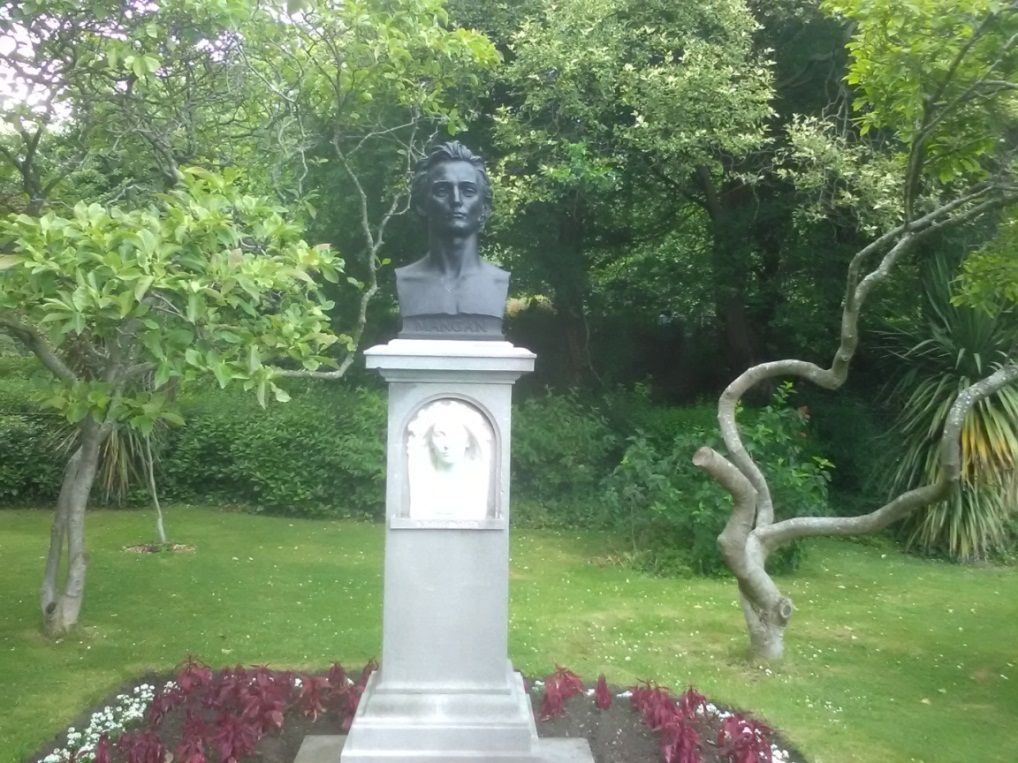 A poet dying in squalor in a garret conjures up images of reflective remorse tinged with sadness at the passing of a gifted servant of the pen. That death brought him or her the adoration that in life they could not master is evidence of the tragedy that the mundane is a poor second to the inspiration of creativity  that the poet lusts after. Choosing between a morsel of food or the mapping of a masterpiece was perhaps Mangan’s gift to us. He died in squalor it is said replete with the companion of poverty to guide him to the next chapter in the after-life. He is regarded as one of the great poets of the 19th century. Thomas Chatterton is the romantic figure who decided on a different path and who is forever painted in the romantic role of the quintessential love poet perhaps. There is an interesting argument to suggest that Mangan perhaps shaped himself in the mould of a Byron or Chatterton. Who was James Clarence Mangan?

Mangan was born on May 1st 1803 and arrived at a time of another watershed in Irish history with yet another attempt at rebellion, this time by Robert Emmet. The family enjoyed a modicum of middle class acceptability in that they were grocers on Fishamble Street in Dublin albeit with a declining position in their fortunes. This was in part brought about by the spendthrift habits of Mangan senior who it appears liked to overindulge in entertaining at a level far above his capabilities. James alas from the age of fourteen found himself having to support the financial predicament foisted upon him. This entailed him having to toil from five in the morning until eleven at night over seven summers as a professional copyist for a Dublin almanac. This period in his life appears to have had a profound effect upon him. Guiney’s (2013) account is both inspiring but equally leaves one in a state of despondency. Earlier attempts at fashioning a familiarity of fellowship amongst his contemporaries fell foul to a failure of replication. His friends were few and far between but amongst them were Thomas Davis and Gavan Duffy both associated with The Nation Newspaper and with  the broader Nationalist movement.  There were suggestions that the potential for finding friendship were lost in an earlier encounter with a lady to whom he showed some devotion. Alas faith would determine otherwise but  we can speculate that his poetry created a canon of contrition which helped to create the speculation that generations of troubadours have struggled with ever since.

His formal education was obtained under the tutelage of the Jesuits in the Liberties in close proximity to the family grocery business on Fishamble Street. He was versed in the Classics, Mathematics, French, Italian and Spanish. Latin apparently was also part of the curriculum. However, as a result of misguided forays into property speculation by his father the family would be forced into moving house on several occasions. Ryder (2004) appears to support Mangan’s rising star status when he talks in glowing terms of ‘the astonishing range of styles, genres and subject-matter’ which manifested itself in a selection of sonnets, epigrams, marches, anthems and imitation aislings (dreams). Indeed, he elevated him to that of rivalling Poe in terms of his tales of the macabre apparently. He would go on to work as a copyist for the Ordinance Survey until 1843 and following that as a cataloguer with Trinity College until 1846, Ryder (2004) continues. Mangan found the work demeaning but it afforded him the luxury of subsistence which was his lot particularly in the latter part of his short life according to Ryder (2004). His devotion or otherwise  to the cause of Irish nationalism would prove controversial to the literary legions. His penchant for using pseudonyms added parhaps to his mystique and of course his demenaour and reputation would have fueled the dabate as to his cultural bona fides.

In essence Ryder (2004) in his introduction uses the term ‘poète maudit’ which infers a refusal or nonconformist attitude towards society. We can speculate that this label might well have applied to Mangan but we are also acutely aware that the necessities of life weighed heavily upon him. Was he the reluctant renegade or merely a victim of the tumultuous tide washing over his homeland, that demanded the ultimate? Writing in The Irish Times O’Hanlon (2018) points to Joyce’s admiration for Mangan albeit being less than tolerant to his supposed “hysteric nationalism”. And yet as O’Hanlon (2018) points out Joyce himself did not retreat into the shadows when he quite unequivocally pointed to England’s treatment of Ireland, when he penned Home Rule comes of Age and Ireland at the Bar. His comments might be viewed as quite vitriolic. Hogan (2010) in accessing Mangan’s work pours cold water on his supposed idealistic nationalist credentials. She joins the debate by casting an inquisitive eye on the offerings of others in exploring Mangan’s motives, artistic or otherwise as expressed in her “Lost Hero of the Past”: Ruin, Wound, and the Failure of Idealism in the Poetry of James Clarence Mangan.

David Lloyd in ‘Nationalism and Minor Literature’ appears to take the view as expressed earlier by Ryder (2004) that Mangan steered away from the “cultural-nationalist canon “. Hogan (2010) points to Ryder’s argument that Mangan was indeed probably influenced by his Catholic (lower middle-class) upbringing with its nationalist associations while Patricia Coughlan posits that the poet was influenced by the English Romanticist School If you would, and by none other than Byron. However, the reality of economic necessity and the crushing cruelty of the Famine were the overbearing burden on a poor Poet, Hogan (2010) reminds us. She goes on to reflect that his circumstances greatly impacted upon his ability to perhaps comprehend an existence that he was alien to. The intelligentsia could wax lyrical on the sacred path to nationalistic endeavour, while he prepared the path to penitential immortality.

He courted the image of an eccentric Ryder (2004) continues with a penchant for wearing distinct illuminating dress, a blue cloak, wide-brimmed hat and green goggles. That aside there is no doubt as to the prolificacy of Mangan’s output having composed over one thousand pieces of work in a rich harvest of headlines. Contained within perhaps his most memorable poem, Dark Rosaleen and the sentiments expressed therein are symptomatic perhaps of the free spirit of the wandering minstrel, the free spirit that determines a nation’s right to self-determination. That determination witnessed by the right of people to follow a theological lifespan with the help of external abettance, was perhaps the cryptic communication of Mangan. He left it to others to determine whether he belonged on the fringes of the revivalist movement or not. However,the Famine screamed and Mangan alas succumbed.

The Fever Sheds in Kilmainham

A deterioration in his health brought on by the curse of a cholera epidemic saw him admitted to the Fever Sheds. He remained there for a number of days until forced to face the final indignity it appears. He was found dying in a cellar in Bride Street on June 13th 1849 by one William Wilde. He would die a week later from malnutrition and cholera in the Meath Hospital. Thomas Clarence Mangan shared the ignominy of death in the dark of a lonely garret surrounded only by the light that shone from his words ensconced on the pages of history. A romantic, a nationalist or simply a lost soul who succumbed to the dreaded drink nurtured only by his love of making magic through the tongue of the talisman. His life seems to have been one of fighting the demons of addiction, opium and alcohol. Melancholia was also attributed to the man; cholera would silence his pen forever.

“Think her not a ghastly hag, too hideous to be seen,
Call her not unseemly names, our matchless Kathleen.” 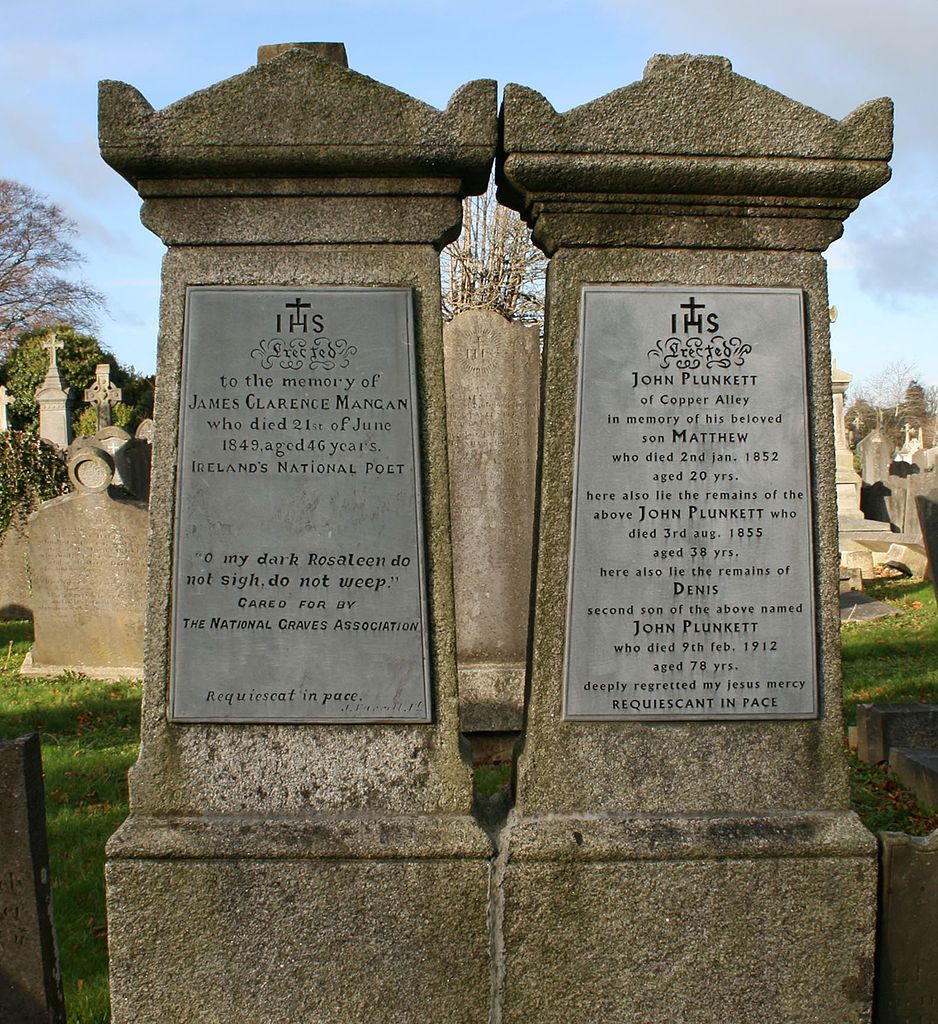 Poets live long after they die, their words presented or misrepresented posthumously as proof positive of their legacy to a cause or its mediocrity, as they or others may view it. In life he was perhaps shunned, in death, sainted. Although presenting perhaps his finest work at the close of his death, he remains an enigma, a forgotten soul of the subterranean world in which he existed, a casualty of indifference. Although having achieved some claim to fame during his life, a mere five souls attended at his funeral. The year 1849 saw the end of An Gorta Mór (the Great Hunger) . One could surmise that death came knocking and Mangan succumbed as if in sympathy, a victim like so many others, and on his way he paused to wipe the tears of Dark Rosaleen. He lies in Glasnevin cemetery Dublin.

“Adieu ! For thee the heavens are bright,
Bright flowers along thy pathway lie :
The bolts that strike, the winds that blight,
Will pass thy bower of beauty by.
“But when shall rest be mine ? Alas,
When first the winter wind shall wave
The pale wild flowers, the long dark grass,
Above my unremembered grave.”
- James Clarence Mangan 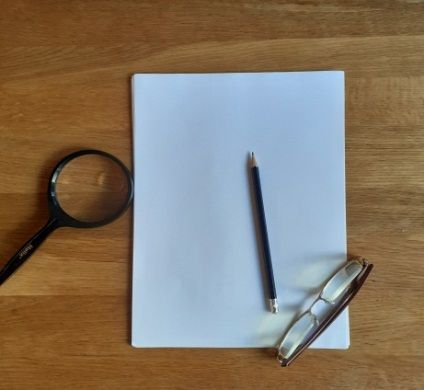