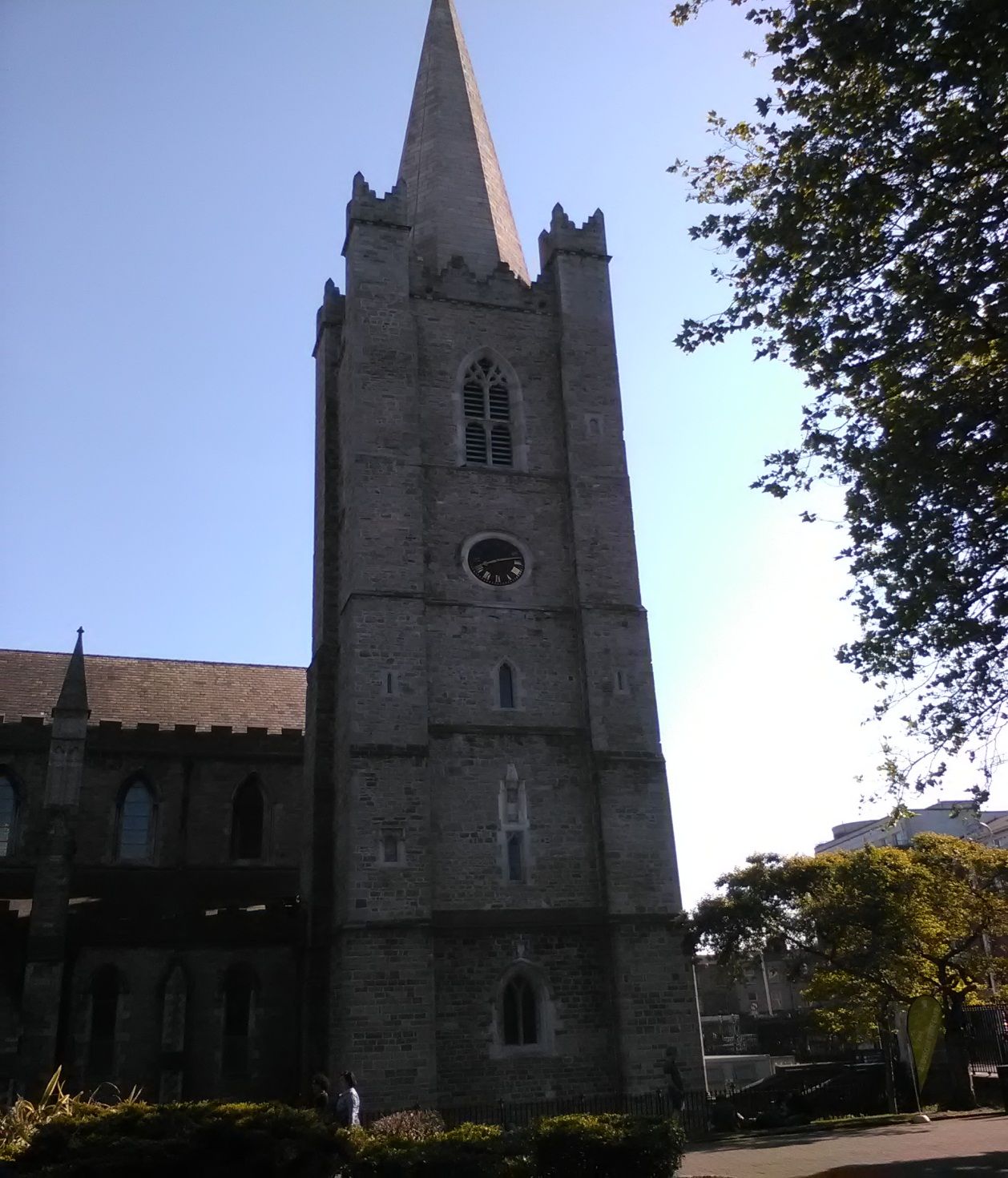 This is a brief overview of St. Patrick’s Cathedral which is situated in the Old Quarter of Dublin. We will look briefly at its beginnings; the people involved in its creation, and at the many illustrious and not so illustrious people who have left their mark not just on the cathedral but also on Irish history and indeed on world history. If as the old saying goes that ‘ History is written by the victors’, then St. Patrick’s might perhaps best exemplify that although it’s near neighbour Christ Church might also have something to say about that. In football parlance we might term it as the ‘Noisy neighbour.’ Although they sit in close proximity to each other there has always been that undercurrent of disguised rivalry that has been a constant throughout the turbulent history of the city. Both of the Anglican persuasion, their allegiances have changed throughout the ages as Ireland’s agonies were directed through the great metropolis that is Dublin replete with the conductor in situe at Dublin Castle.

A tour of medieval Dublin is not complete without seeing Saint Patrick’s Cathedral. It stands majestically in the Old Quarter of Dublin where it casts its long shadow over the citizens, the visitor and the curious onlooker. Contained within its walls are the stories of the many that have left their mark on history. Some still lie Within this masonry marvel, others lie Without, testament to the turbulent times that brought death, destruction and decay to its people. The story of this site goes back to (possibly) the time of St. Patrick himself. There is a legend that St. Patrick was travelling around Ireland and he decided to stop here in this area to use a well to baptise people into the Christian faith.

For many years it was assumed that this was no more than a legend, however in 1901, an accidental discovery was made during some work beside the Cathedral. Six Celtic grave slabs were found six feet underground where the adjoining park is situated. These slabs are over a thousand years old and one of them was found covering the remains of what appeared to be an ancient well. A number of these slabs can actually be seen on display in the cathedral. While of course we can never prove for definite that St. Patrick was indeed here, the slabs do at least prove that this site has been in use for over a thousand years. It is possible that there has been a church on this site since the time of St. Patrick, around 1500 years ago. The first recorded reference to a building onsite was in 780AD.

This church was known as St. Patrick’s’ ‘in insula’, as it was located on an island between two branches of the river Poddle which runs under the cathedral and this site was chosen as a result of the supposed link with St. Patrick. This was probably a small Celtic wooden church.  However, it was with the arrival of the Anglo Normans to Ireland in the 12th century that brought in its wake fundamental change. As well as being fierce warriors the Normans were experts in stone masonry. There were three Anglo-Norman Archbishops that would prove pivotal in the creation of St. Patrick’s. The first in that triumvirate was John Comyn. He raised the status of Saint Patrick’s from a parish church to that of a collegiate church-that is a church with a larger body of clergy than a parish church, and one dedicated to worship and learning. Of course the city already had a Cathedral (Christ Church Cathedral) so Comyn’s motives for wanting to elevate St. Patrick’s is not entirely clear. The fact that the building was outside the original city walls may have been appealing to Comyn. There was also the issue of taxation and who likes paying tax after all. But equally it may have been the case that Comyn was trying to impress the king thereby cementing his profile as the man who could be depended upon to be the king’s ‘fixer’ as it were.

He in turn was followed by Bishop Henry de Londre who upgraded the church to that of a cathedral but it was primarily his successor in turn, Archbishop Luke who oversaw the building of the cathedral which took in total 40 years before completion. Alas Luke would not see the fruits of his labour as he had suffered blind ness by then. You will appreciate that these buildings both Christ Church and St. Patrick’s would have been extremely awe-inspiring as there was nothing comparable in Ireland at that time. This was of course the intention: to convey the message that the new rulers were capable of such imposing and powerful edifices. Examples of this are to be found in other towns and cities were a castle and church or cathedral heralded the new order. 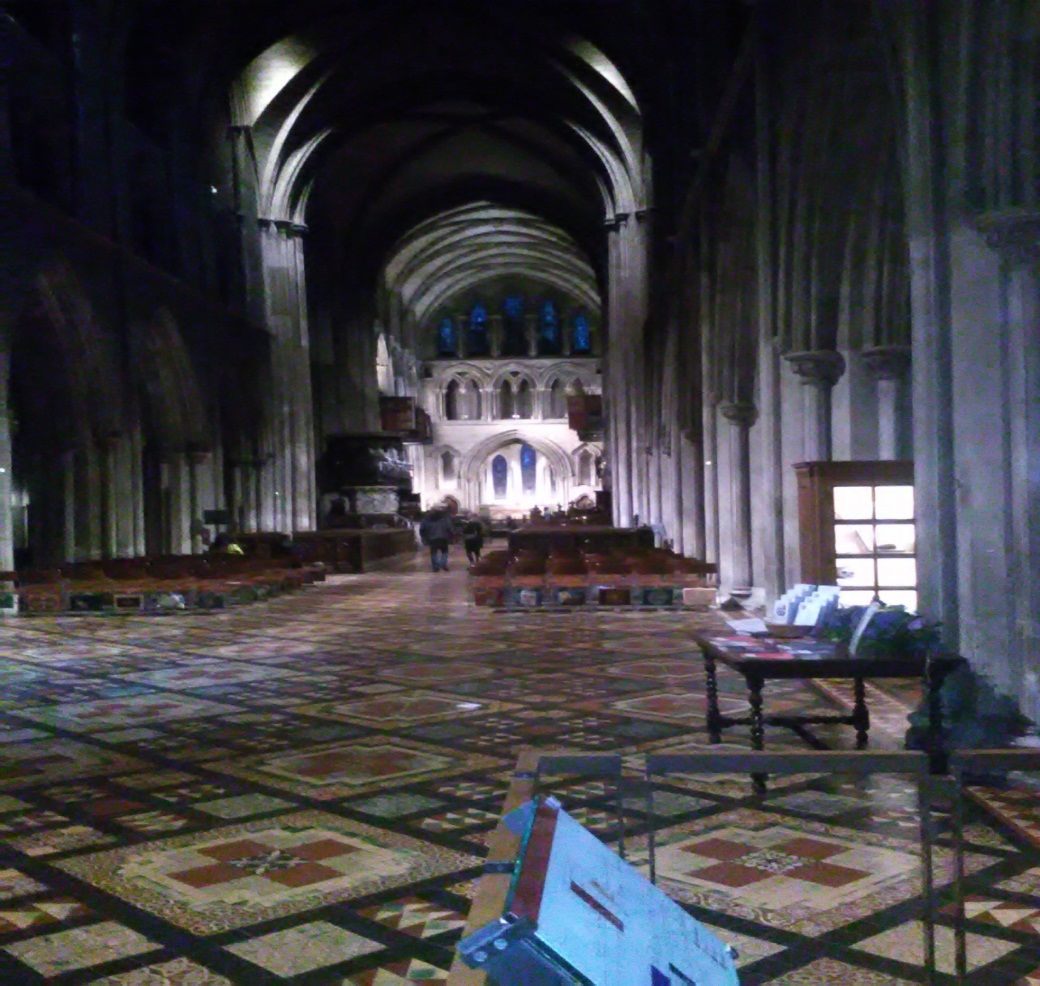 One could argue that the Cathedral is most decidedly slanted not just in terms of its structural standing but also in terms of its former allegiances. The many who are buried here or those whose exploits are recorded here were most decidedly in favour of maintaining the status quo. It’s most favoured and celebrated actor, Jonathan Swift although born in Dublin, was most decidedly of Anglo-Irish persuasion. His affiliations established by being given the position of Dean of St. Patrick’s by the queen of England, did not however, prevent him from being an open critic on issues that he felt impacted on the poor who made up a sizeable proportion of his parishioners. On a number of occasions he used his position to embarrass the authorities as it were but today he is perhaps best remembered for his contributions to the world of literature. Chief amongst his works being ‘Gulliver’s Travels’. A bust of the great man adorns the wall close to a collection of memorabilia associated with him. 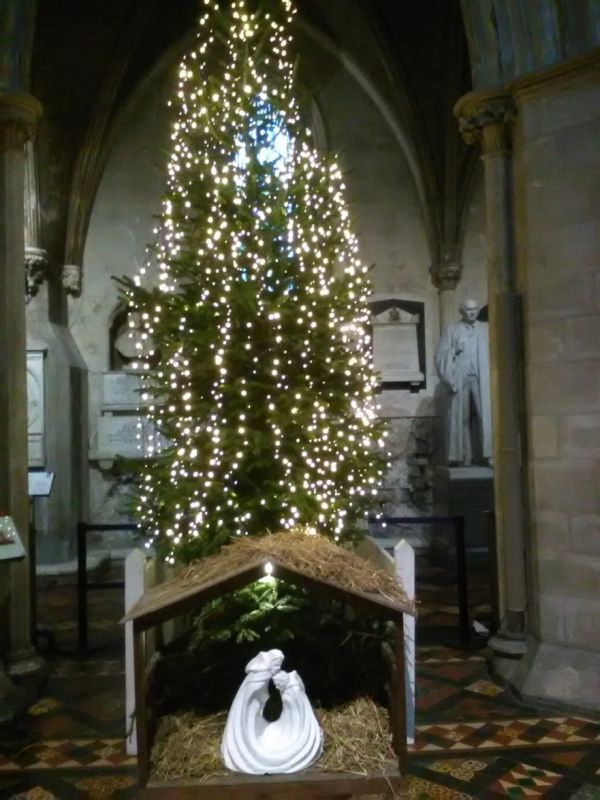 The Guinness family have had more than a passing interest in the church; and indeed in this part of Dublin, in that many of the landmarks that add to the landscape are examples of their benevolence. The restoration of the Cathedral being perhaps chief among them, but also of course some of the housing stock that resulted from the Ivy Trust. Edward Cecil Guinness it was who was behind this as well as being a contributor like his father Benjamin Lee Guinness to the upkeep of St. Patrick’s. Another most notable and appealing aspect of the Cathedral are its stained glass windows. Pride of place perhaps are the windows in the West wing who pay homage to the saint. These windows date to the 1850s approx. And are the work of William Wailes and Sons from Newcastle upon Tyne in England. They depict the life of the saint and his sojourn in Ireland in all its manifestations in 39 sections. These windows are deemed to be the most impressive from the collection that adorn the cathedral.

The War of the Roses in England had ramifications in Ireland and is revisited when we take in the famous ‘Door of Reconciliation’ story. The door is to be found in the North Transept and is hugely significant in the saga of two families: the Fitzgerald’s of Kildare and the Butlers of Ormond. Hear also the story of the ceremonial flags that adorn this corner of the church and also another Guinness connection. The fact that this section of the cathedral was in fact a church in its own right lends more than a degree of curious amazement to the many who would normally take tours of the cathedral. 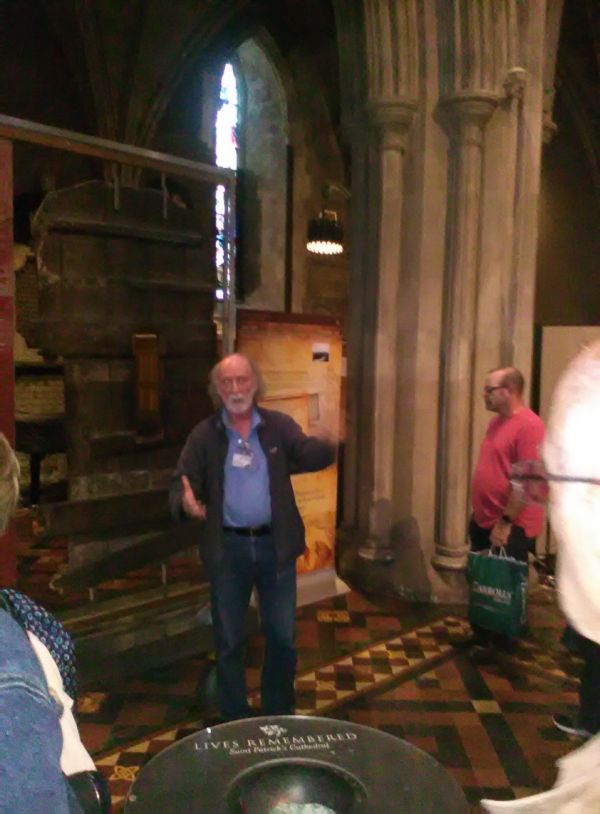 The Knights of St. Patrick are also a prominent part of the story of the cathedral. The order was styled very much on the ‘Order of the Garter’ in England and the ‘Order of the Thistle’ in Scotland. Its function would have been primarily ceremonial but it did lend prestige to the families who made up its numbers. These families are remembered by having their ceremonial colours on display in the Chancel of the church. This is perhaps the most beautiful part of the cathedral. The inauguration of the Knights took place here in 1783and was initiated by George 111. The last high profile figure to join the order was the Prince of Wales in 1869. All such ceremonies were discontinued in 1922 when Ireland gained independence.

Today the Cathedral is used in many different guises outside of its official capacity. It is open to the public and guided tours are a feature along with its interaction with the local community in holding social events and indeed charity concerts to name but a few. It is also an educational facility for schools and centres for marginalised people. It is further enhanced by its choir which adds to its august surroundings helped by the acoustics which lend to their heavenly sound. There is also an interactive section for people who want to explore the history of the Cathedral in more detail along with a section for children. In essence the church has something for everyone and is a must-see in Dublin. Over the course of its history it has witnessed many historical events. Indeed it was the first university in Ireland but didn’t maintain this status. It also saw use as a library and on one occasion it is alleged it was used by Oliver Cromwell to stable his horses. 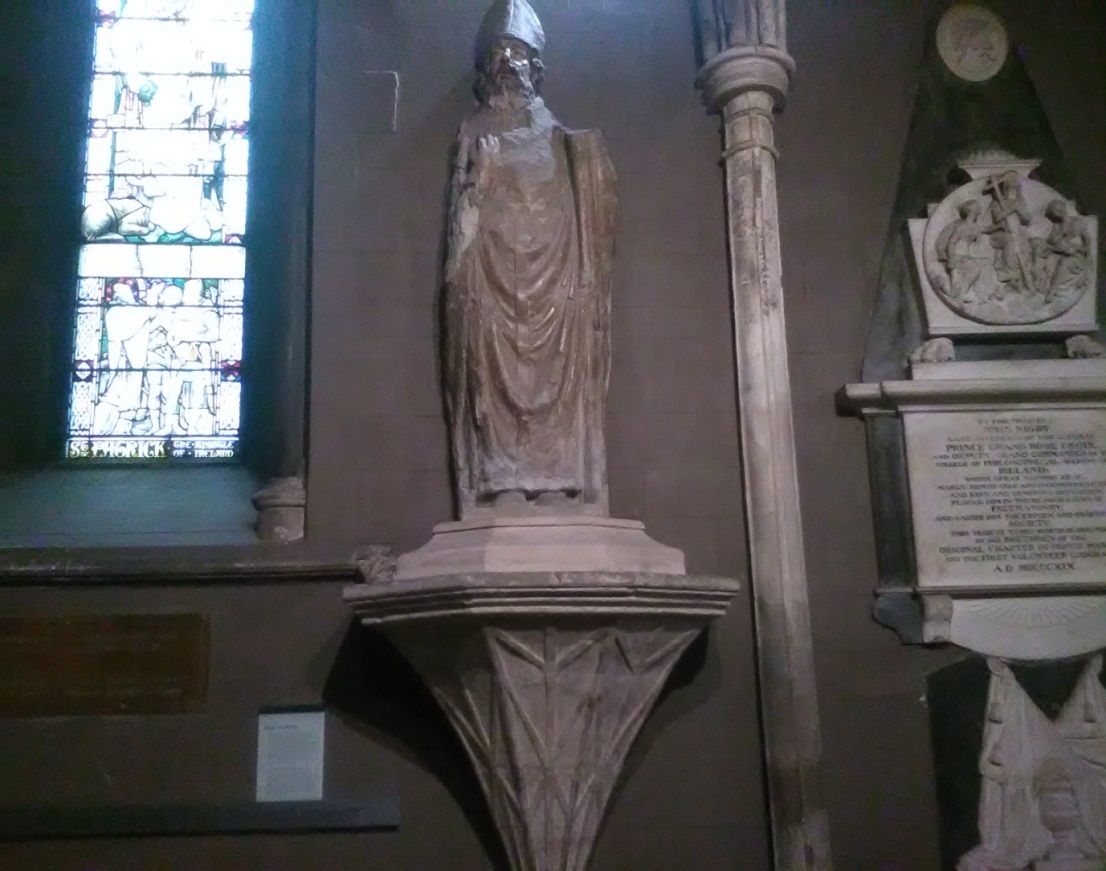 On reflection we can say that no brief synopsis of the cathedral can do it justice. It remains, along with its near neighbour Christ Church as symbols to a bygone age when prestige was measured by the construction of a castle at one end of the colony and a church at the other; a persuader and a comforter one might argue. Hopefully when the current crisis has passed and a degree of normality has returned, St. Patrick’s can once again welcome back its many admirers and visitors.  This brief overview cannot do justice to this historical masterpiece. Many of its secrets and stories must remain within the confines of the inner sanctum of our guiding atlas for the moment. Hopefully the New Year will bring renewed confidence and the opportunity to share St. Patrick’s and its stories with everyone. In terms of its longevity the current work on its roof structure shows the intent of its custodians to pass on to future generations the historical imperative that is St. Patrick’s Cathedral. 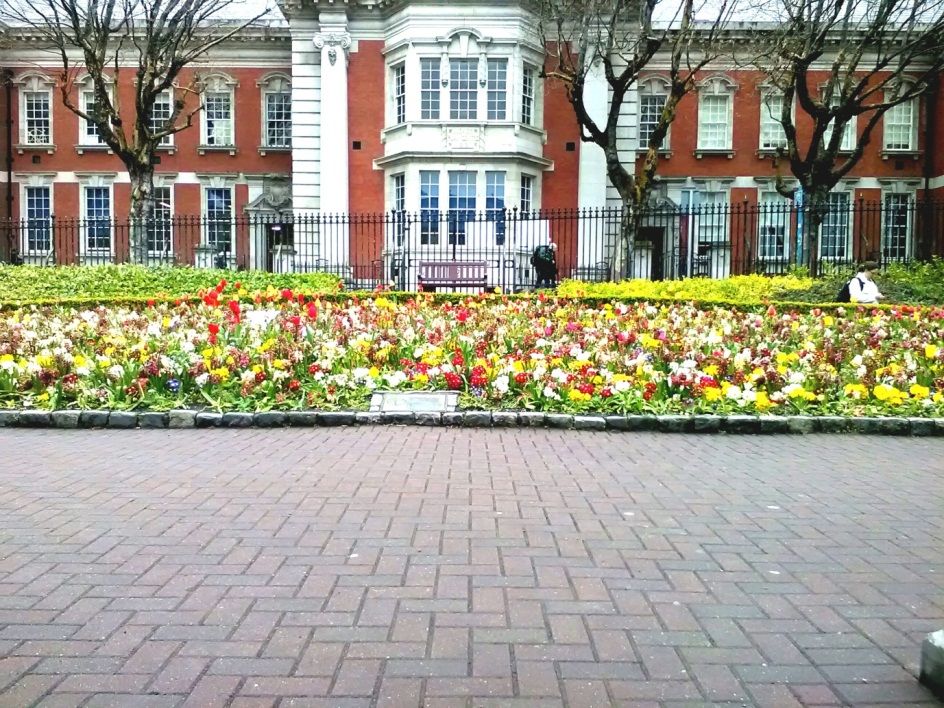