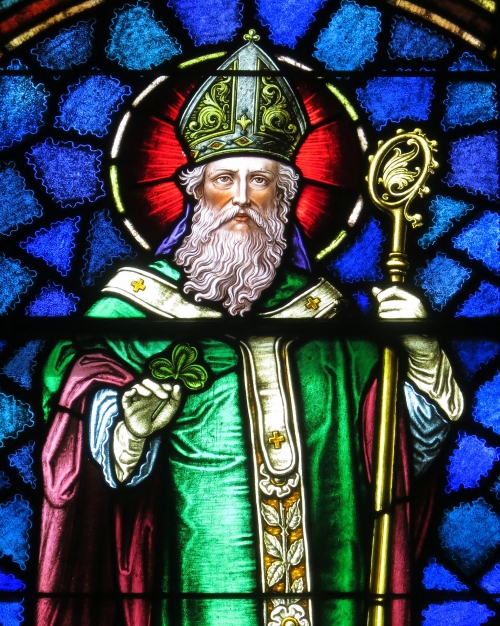 The Confession is one of the few pieces of work still extant that give us some insight into the life of the saint. We learn that Patrick was born into a Roman Britain family possibly on the west coast albeit this cannot be confirmed. The possible date of his birth is given as 415AD somewhere in Wales. Carlisle is mooted as being the  area of Patrick’s abduction. However, the west coast of Britain would have been subject to raids from Ireland during one of which we know that Patrick was taken and brought back to Ireland as a slave. Some historians date this period as being around 432 AD. Patrick, it is thought may have been around 16 years old at the time. While the specific dates relevant to the saint’s existence and life are open to historical argument, we are only too well aware of his influence. Patrick, however, would spend six years in Ireland as a slave before making his escape. It is thought that he made his way to Gaul where he spent a number of years. He would later return to Ireland hearing the voices of the people urging him to return in a dream. But the country had been exposed to Christianity before the arrival of the Saint. Palladius had trod the path of Christianity before him on the island.

Palladius had been made a bishop by Pope Celestine and was tasked with looking after the Christian faithful in Ireland. Alas Palladius passed on after just over a year, and a Bishop Germanus consecrated Patrick as the second Bishop of Ireland it appears. Sources put Patrick at 43 years of age when he took up his position in Ireland where he would spend the next 30 years approx. When he landed on its shores, he found only scattered Christian communities and individual believers. On the occasion of his death, Ireland had become for the most part Christianised. This point it appears has achieved common consensus in that the role of Patrick and Palladius before him was not, at least initially, to convert pagans but rather to administer to the Christian community there. But this would change. And what do we know of his family?

His father Calpurnius was a deacon of the church and his grandfather a priest. His mother’s name was Concessa. Patrick’s full name was apparently; Patricus Magonus Sucatus. At the time he became a bishop, he used the name Patricus (or Patrick). It was apparently the custom for people in Britain to bear both a Latin and British name. While not a dedicated religious disciple himself in his formative years Patrick’s devotion to prayer during his six years of exile as a swineherder in Ireland would change fundamentally his religious persuasions. It is thought that he may have become a deacon by 445, a priest by 450 and a bishop by 460. It was as a bishop that he returned to Ireland the dates of which still remain contentious. One can appreciate that subsequent research carried out in later centuries may have led to a distortion in later manifestations of the saint’s life. The story of him banishing the snakes might be an example of this.

One of the most endearing stories attached to Patrick concerns his encounter with King Angus of Cashel. St. Patrick while carrying out the ceremony of baptism with the king, accidentally put the butt of his crozier through the king’s foot. It wasn’t until after the ceremony that Patrick noticed to his horror what had occurred. The king, however, bore the pain thinking that this was all part of the ceremony and had remained silent.

Another legend connected with the saint was the use of the shamrock to explain the Trinity.The king of Ireland at this time was Laoghaire and it was the pagan custom to light a fire on the Hill of Tara to welcome the coming of spring and to feast the occassion. Thereafter people could light their fires. Patrick however who had heard of the gathering lit a fire across the valley on the Hill of Slane in defiance of this rule. On his way to Tara Patrick had picked a shamrock which he knew was sacred to the Druids. The Druids afraid that Patrick was trying to undermine the authority of the king, urged him to defeat Patrick. They confronted the saint at Slane and tried to extinguish his fire but could not do so. Patrick explained that he was lighting the fire of Christianity. The king listened to him but found it difficult to comprehend  particularly the Gospel and the Trinity. Patrick remembered the shamrock, took it from his robe and broke off a stem. There were three leaves on the one stem, three in one-just like the Trinity.The king realising that Patrick was not a threat allowed the saint to preach the Gospel throughout the land thereafter.

Despite the controversies and much academic discourse over a protracted period, we can say with some degree of certainty that Saint Patrick did convert people to the faith and deserves the mantle as Ireland’s foremost saint. We will, however, follow the tradition of guarded deliberation by merely stating that he lies in Armagh in the north of Ireland to this day.The Book of Armagh contains the earliest copy of Saint Patrick’s Confessio known to exist and is held in the library of Trinity College, Dublin.