One might be forgiven in trying to raise the status of the humble London Plain tree in the King’s Inns in Dublin, that ‘which accommodates the ‘Hungry Tree ‘.However, no matter what ones tastes are, when it come to the beautifying qualities or otherwise of this humble tree, it does attract more than its share of curious onlookers. Paradoxically it has an added attraction in that it holds court in the precincts of that bastion of legal prerogative, the ‘Inns’. It does allow us the opportunity however, to view the importance of trees from a different legal perspective if you would, that of ancient Ireland. I refer of course to the Brehon Laws where trees were held in high esteem. The Brehon Laws existed up until the 17th century in Ireland until they were finally abolished. But even before that trees were respected in a holistic way by the people of Ireland. The Celts held them in high regard and of course they were encapsulated into the fabric of Irish society in terms of our communicative inventiveness by way of the Ogham Stone.

In terms of mythology and folklore we are rich in abundance when one reflects on the mystifying attraction of trees but particularly that of the Hawthorn tree. Its spellbinding allure is more than superstition some would say. Traditions and beliefs still run deep and the sacredness or even fear of the Hawthorne should not be taken lightly. For within the allure of storytelling hides the invisible presence of ‘Na daoine maithe’ or the good people. Some people, particularly within the farming community will not indulge any transgression against ‘Na daoine maithe’, most noticeably at certain times of the year, May being a red flag month you might say when the people of the Otherworld are at their most devious. Retribution will be swift against the transgressor, or so the story goes and the Hawthorn is also renowned as a favourite meeting place for the lads as they set about putting manners on any erstwhile rivals.

Today, in the not so purified air of modernity when talk turns all the more to environmental awareness, we might spare a thought for the singularly lack of trees on our island. Where once the canopy of life covered large swathes of the country, we are now playing catch-up as we choke on the combustion of life as we know it. It would be nice if Hurleys for example were still made of Irish Ash as heretofore but alas we must now import it. Being the inventive types that we are, the once proud Gaelic game of Hurling has succumbed to the onset of the plastic Hurley. So, the essential ingredient is now being substituted by that which we are trying to nullify. 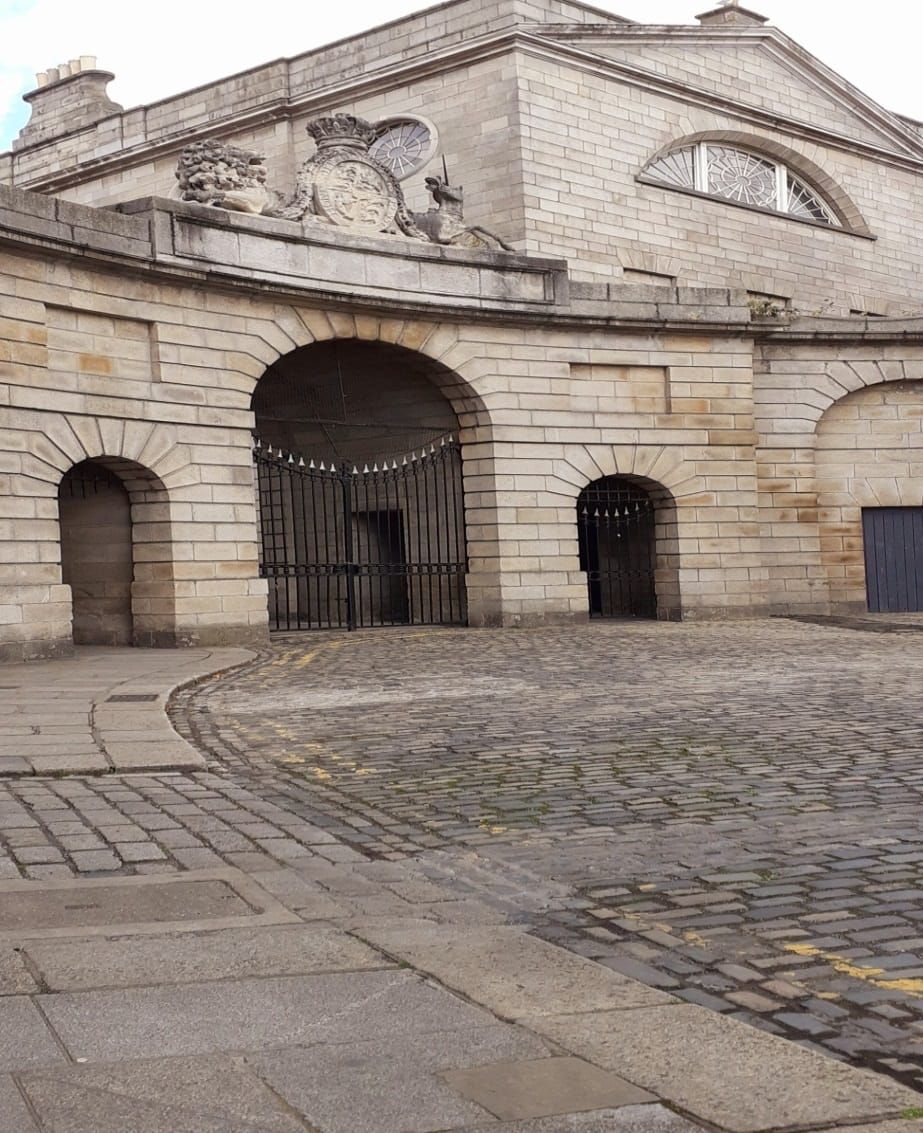 And so as I watch the curios reality that is the ever popular ‘Hungry Tree’ I contemplate on nature and its refusal to bow to the madness of modernity. Overshadowed as it is by its neo-classical neighbour, the building that owes much to the energies of Gandon and Johnston, it sits in judgement on the trials and tribulations of those of us who attempt to pass the bar that life imposes. Hurrying and scurrying as we go we seem oblivious to the taunt of nature as it slowly devours our attempts to add to its appeal. It is perhaps an example of nature reminding us that it can and will fashion its own answer to our destructive tendencies. 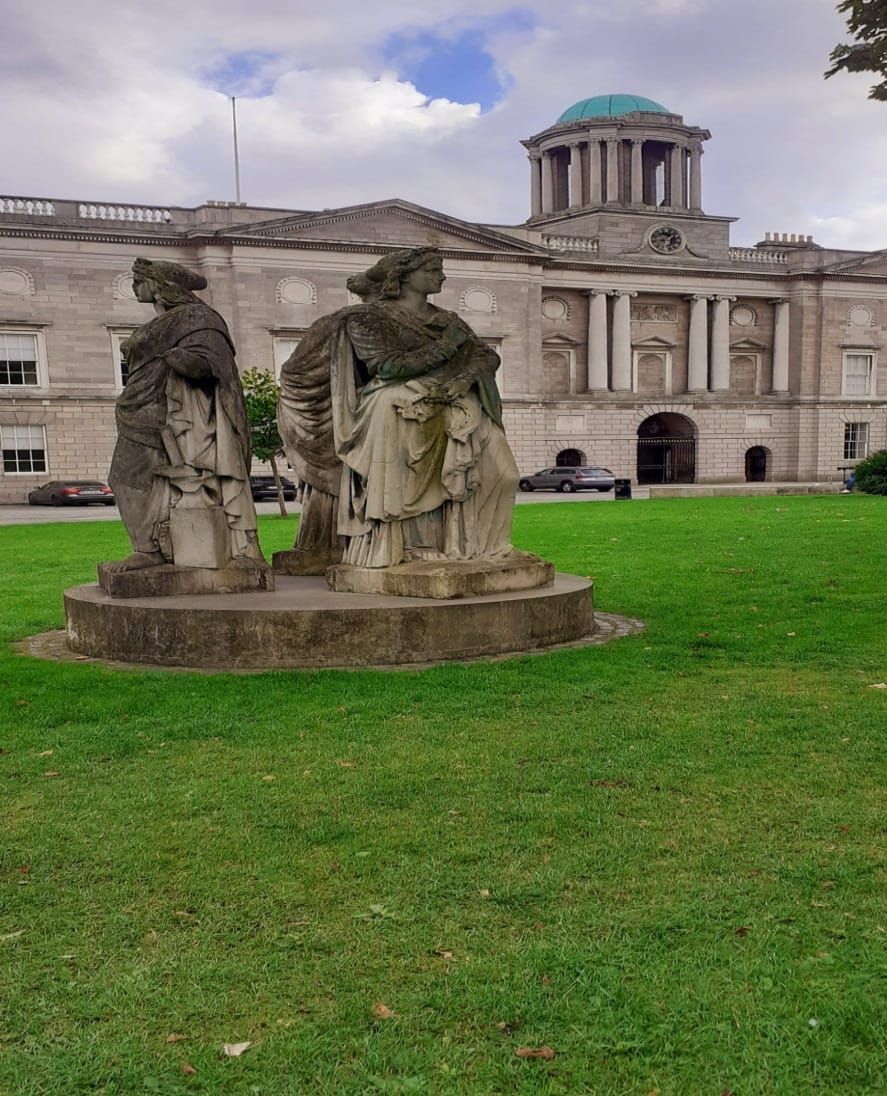 In imposing its presence it has perhaps set down a marker if you would. The imposition of laws on humanity and the lack of enforcement of laws as protective measures to safeguard the environment in general, leave us poorer perhaps as custodians of that which we supposedly hold dear. Institutions were in the past sometimes used as a bulwark against the advancement of certain sections of society in Ireland. The London Plane, not native to this country is seen in some quarters as laying a different marker, depicting as it does, or so the argument goes, longevity, superiority and so on.

This tree is perhaps highly regarded as a tourist attraction and not so much for its beauty or lack thereof. Indeed, at one stage it came under the protective glare of the environmental movement in Ireland. This particular tree is estimated to be about one hundred years old. And so it stands oblivious to its curiosity and many photo shoot enthusiasts but always demanding of our acknowledgement of its existence. So, there is always room at the Inns if you’re hunger demands more than the salutary acceptance of acceptability. So, if you’re out for a constitutional and happen to be in the vicinity of Constitution Hill in Dublin, why not rest a while at the Hungry Tree…if you dare!