Tailteann Tours and The Fleadh

After an absence of many years, I finally got to savour the delights of the premier musical festival of Ireland again when I recently visited Drogheda in County Louth. If you have never been to a Fleadh (festival), imagine if you would musicians of all ages, cultures and abilities playing on your local main street/s. So outside your local chemist shop musicians set up to perform solo or as a group to entertain the masses. In every nook and cranny banjos blast, mandolins move and tin whistles stir the emotions. Throw in a Bodhrán or two, a melodious voice or three, and you have a bash at creating a musical masterpiece. Not to everyone’s’ taste perhaps but even the uninitiated were equally impressed to find this open-air assembly of Tradition inspired cultural nomads and apprentices practising their love of music on the streets of the town.

Yes they had sessions in the pubs but for the sheer beauty of the art of playing and singing, the streets are our stage, the pulse comes from within. Young boys and girls knee-high to a banjo were out giving it their all. The not so young were there as well ‘giving it a lash’ as they say. For the purists there was much to admire. Old friends made new friends; the clicking of shoes off improvised mobile floors could be heard as the dancers performed. Fun and frolics ensued with applause drowning out the occasional crying bachelor (or should that be baby) with not a dry-eye in the house. It brought back memories. If life could only be like this all of the time the sentimentalists might say. While there is a competitive edge to it in that musicians, singers and dancers are competing in their respective fields to achieve All-Ireland recognition, some argue that it is the biggest stage on earth if you would where Irish arts can be witnessed. 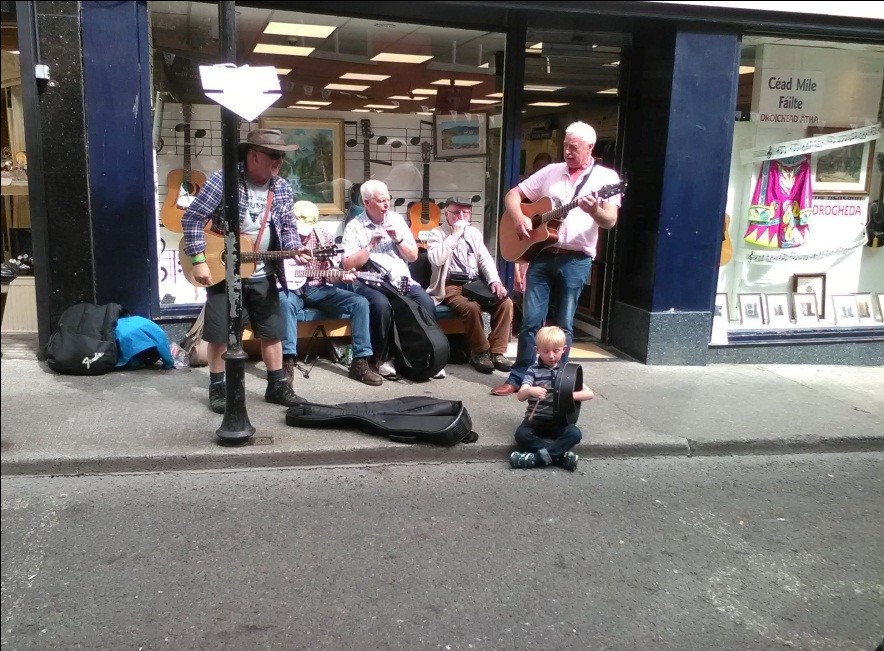 We Irish are not unique in using every occasion or event to raise the rafters. In one of our earlier offerings with Tailteann tours we mentioned the great Turlough O’Carolan, a wandering minstrel of renown, indeed our traditional musical father some would argue. While Turlough dates back to the 17TH century music has been played in Ireland since time immemorial. Our national emblem the harp, which Turlough made famous was played thousands of years ago apparently but essentially has its origins elsewhere. So while the arguments continue about who invented what, it’s worth looking at where the Fleadh has arrived at and it’s connection with if you would, our identity.

Fleadh Cheoil na hEireann (The Musical Festival of Ireland) is associated with the year 1951 when it took place in a place called Mullingar in County Westmeath. From humble origins it has now become a world event with participants from far and wide coming to sample the beat of the best and to share the universal love for Trad music. Our history has brought the music to many corners of the universe as it was carried on the shoulders of people who in many instances said goodbye to the land of their birth and encamped with fiddle, whistle and song to their new home. In many parts of the US, Canada, Australia, New Zeeland, the UK and the list goes on; Irish music has many followers and practitioners. Its travelling companion in some instances is the Irish language which can be heard in many foreign outposts. Hurling, one of the fastest field sports in the world is being played in China by all accounts. However, it is our music that takes centre stage. 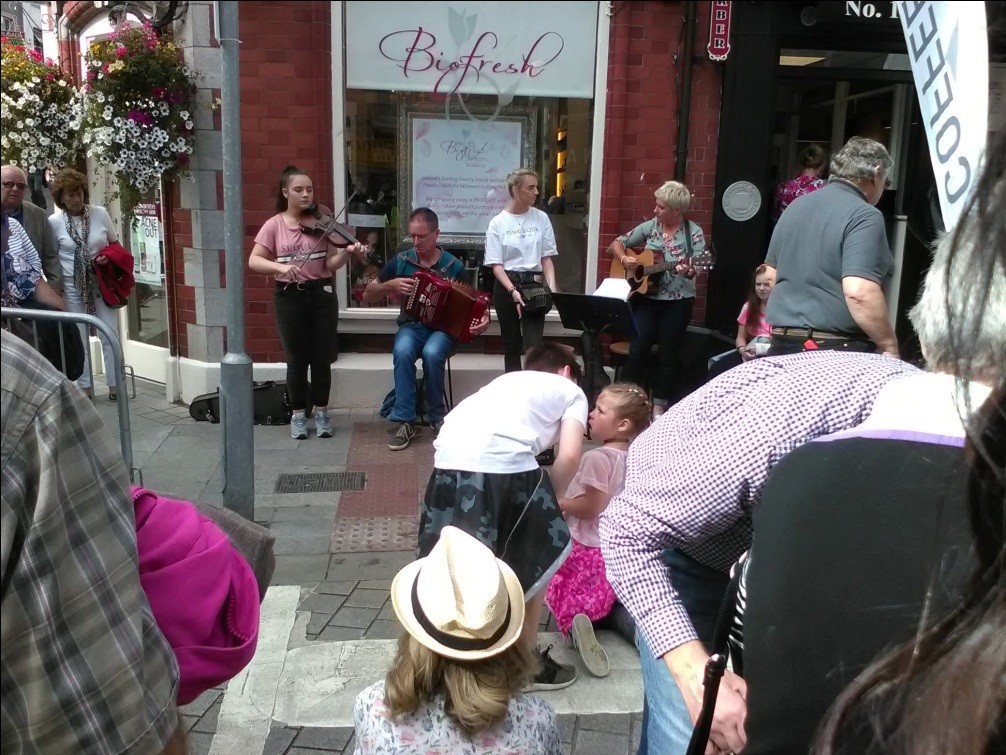 In an age where technology has replaced story-telling the fact that this particular brand of music still retains its hold on a large section of our people and its many admirers is perhaps the testament to its appeal. Sean Nós singing is another example of where the connection is perhaps the people and the music: hauntingly beautiful, uplifting and awesome it takes you places that you have never been. Even if you haven’t been born to this tradition, the music has found many converts. But back to Drogheda. The plans are to stage the Fleadh again next year in the town. Conservative figures suggest that the attendance for the week of the festival this year surpassed the half million mark. Crowds flocked, coffee flowed and the sun shone. People eating ice-cream, ice-cream melting as it does, food being scoffed and the occasional Garda (police) could be seen. A perfect production, everyone enjoying themselves. It was a pity to have to leave.

This lovely rendition is to give you a flavour of the feeling, passion, sentiment and completeness which for me can often be found in the art of Sean Nós singing.

You don’t see too many people hitching any more to the Fleadh’s. Things have changed. The musical odyssey, however, goes on as the generational baton of pleasure is passed on. The young people embrace it, they own it. On the islands, in the small towns, in the cities, in clubs and pubs throughout the land, the tradition continues. The beat quickens or slows depending on the humour. TailteannTours leaves you with a verse that we put together for the occasion. The Fleadh Cheoil na hEireann is a once in a year event. The smaller festivals can bring you to the ultimate stage. The Festival of Life goes on forever. I can’t wait until next year.

The festival of life

The dulcet sound on time-honoured ground
Where minstrels gather to meet
An age-old store of tunes galore where the
Multitudes are the beneficiaries that feast
On the notes that store centuries or more
Of a humbled nation’s defeat, but ingrained within
The lilting din of stories and places that meet
The unbridled strain of a heavenly refrain where
Love and music greet.

The little ones intent on fun drown in a sea of emotion
As they learn their trade at the tender age of musical devotion
It can all be seen here on the green island of saints and legends
Unlocking the past with a whiff of gas as car fumes envelop our station
But true to form we weather the storm and embark
With another rendition, of stamping feet to the music’s beat
Someone is heard saying an act of contrition
Another year to savour and steer the good ship of Irish Tradition
Tune your strings practice and sing as we await the coming mission

Sean nos shadows that weave their gladness wherever the Irish beat
On their music miscellany with sounds so heavenly that even my tears retreat
With perfect pleasure I admire the endeavour that all-around can be seen
With pride and passion as we learn to fashion the wearing of the green
Linnets fly as I admire the blue sky filled with festival commotion
The meaning of life, the meaning of death, is here in this musical ocean.